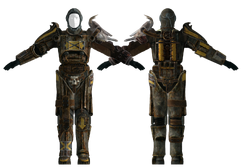 Through years of misuse, makeshift repairs with whatever materials were available and constant use, it is a rusty, highly stylized suit of power armor. The left arm of the suit was replaced with the sleeve and glove of the raider iconoclast armor, a brahmin skull substituted for the left pauldron and various bits and pieces of metal were used to patch holes in the structure of it.

It is aesthetically identical to Ashur's power armor. Everett notes this as being intended by the armor's designers. Pitt natives came to see Ashur as a god, and made this set of armor to emulate the way their god looked. It was one of the original suits of power armor worn by the Brotherhood of Steel. While they are identical in design, their effects vary.

The following is a comparison of Ashur's power armor and the tribal power armor.

It is granted to the Lone Wanderer by Everett for finding all 100 steel ingots. He calls it the prize of his collection.

Retrieved from "https://fallout.fandom.com/wiki/Tribal_power_armor?oldid=3102271"
Community content is available under CC-BY-SA unless otherwise noted.