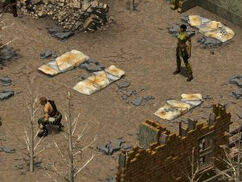 Tribals are characters in the Midwest in 2197.

This section is transcluded from Tribals. To change it, please edit the transcluded page.

There are some groups of tribals living in Midwest region, and are usually friendly folk. Three missions in Fallout Tactics involve visiting a place with a tribe: Dirt Haven tribe (only in the demo), are a peaceful people who live in a small village north of Chicago. Their leader is called the Town father and their shaman is called Salik. Brahmin Wood tribe, are a wealthy tribe who worship Brahmin gods. They live in a large village west of Chicago. Their leader is the tribal father Charon, and their shaman is Hawkeye. The last peaceful group, the Peoria tribe live near the remains of Peoria. The people who live there are Whachutu tribals. Their leader is Chevron the tribal father, and their shaman is Dhal. Also, one raider-tribal faction that the Warrior has to defeat, called Beastlords, are a people who have a unique mutation, allowing them to take control over animals. Their leader is Daarr.

After the Freeport mission is completed, some of the tribals may join the Brotherhood, so the Warrior can recruit for his/her missions.

Tribals appear only in Fallout Tactics.

A tribal being punched by a robot in Fallout Tactics ending
Add an image to this gallery
Retrieved from "https://fallout.fandom.com/wiki/Tribal_(Fallout_Tactics)?oldid=3275909"
Community content is available under CC-BY-SA unless otherwise noted.