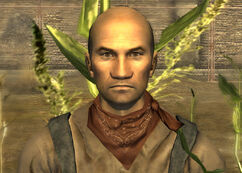 “Hey, I'm just a farmer. I don't want any trouble and I don't have anything valuable.”

Trent Bascom is a farmer living at the NCR sharecropper farms in 2281. He can be found tending crops towards the southwestern corner of the farm.

Originally from the Hub, Trent moved to the Mojave Wasteland because of the Thaler Act. Trent grows maize and tobacco and has trouble meeting his crop quota, complaining that there isn't enough water. Investigation of this issue reveals that the water is being illegally diverted to Westside.

Retrieved from "https://fallout.fandom.com/wiki/Trent_Bascom?oldid=3125634"
Community content is available under CC-BY-SA unless otherwise noted.