Fallout 3
“Right then and there I created the Treeminders... the Great One's last line of defense.”— Tree Father Birch

The Treeminders are a peaceful religious tribe that protects Oasis in the Capital Wasteland in 2277.

The Treeminders are an exclusive cult built around the worship of Harold, an FEV mutant that nurtured a tree that grew out of his head and eventually overwhelmed his body. He took root in the northern Capital Wasteland and was found by a wanderer in the late 2250s.[1][2] This wanderer, later taking the name Birch, beheld the glory of Harold and knew other wanderers would seek to do the Great One harm. He founded the Treeminders, a group of pure-hearted individuals that would protect the Great One as his last line of defense.[3] Once Harold took root, a verdant vale of growth spread from the tree, washing the barren hillside over with life and greenery,[4][5] and enticing animal life to inhabit the area.[6] The water in the area is still irradiated however, interpreted by Tree Father Birch as a way to be reminded of who they once were.[7]

In 2277, a schism has divided the Treeminders into two camps. Tree Father Birch, among others, seek to keep Harold's influence in the secluded vale, fearing that opening it to the rest of the wasteland will mean its inevitable exploitation and destruction.[11] As such, Birch desires that Harold's heart, found deep beneath his roots, be slathered with a harmless sap to curb his influence from spreading.[12] Leaf Mother Laurel and others, however, wish to see Harold's influence spread across the wasteland and rebirth the world in his image. She feels Birch does not understand that Harold's growth is a miracle rather than a curse and benefits the entire wasteland.[11][13][14] In opposition to Birch's plans, Laurel wishes to cover Harold's heart with a liniment that would accelerate Harold's growth and bring life to the wasteland in mere decades.[15]

A significantly smaller faction runs through the Treeminders: only one person wishes to see Bob's influence stop entirely and that's Harold himself. Harold has been rooted in the same location for decade upon decade, unable to eat, sleep, read or do anything entertaining at all; he was able to command the Treeminders to sing and dance for him and even made one stand on his head for a day, but this became boring.[16] He has ultimately been tormented by inactivity for so long that all he desires is an end to being a tree.[1][17][18][19] While he appreciates how peaceful and protective the Treeminders are, Harold's requests for death have fallen on deaf ears and they insist that his pleas must be divine riddles.[20][21] According to Harold, the Treeminders "listen when I talk, but they don't hear."[22] In 2277, Harold felt the coming of the Lone Wanderer and allowed them to enter Oasis to speak to him in order to share his true desires with an unbiased party.[23] Harold barred the door to the cave housing his heart with his roots, and would not allow anyone into the cave until he was able to speak to the impartial outsider.[24][25] Depending on the Lone Wanderer's actions, Harold's growth was either accelerated, stunted or stopped entirely.[26]

Only a select few are allowed to pursue the title of treeminder. Outsiders are forbidden within Oasis, but exceptions can be made by the Harold to let them in.[27] Normally, becoming a disciple of the Great One takes many years of dedication to the doctrines of the Treeminders.[28] Out of reverence for the One Who Grows, the One Who Gives and the One Who Guides, the Treeminders do not speak the god-tree's name.[29] As reverent as they may be, the Treeminders have difficulties listening to the desires of their god. Whenever Harold asks something of them, like them to deliver him to his death, his request is interpreted as a grandiose riddle to be pondered by his followers or a trial to test their faith in him.[30][31]

In order to enter into the Treeminders, one must submit to a simple, ritualistic ceremony involving drinking a sap that purifies the mind and body of anything that could possibly hurt Harold.[32] Upon imbibing the sap, the Treeminders present at the ceremony recite a prayer to ward off bad spirits:[33]

“I bid you depart, agents of destruction, through the power of His divine will. Leave our homes and bodies immediately; live no longer in them, but pass over into places where you can harm no one. In the name of His Frondescence, I call His wrath upon you, so that, wherever you may go, you bear it with you and, diminishing from day to day, you may disappear; except where you serve the health and good purposes of mankind, may no trace of you be found. All this may He be so good as to grant us, who is to come to judge the living and the dead, and the world by his verdure. Amen.”— The Ceremony of Purification

The group has generally done away with using technology and have given to relying on the natural world around them to support and protect the Great One. According to them, technology has only brought death and violence to the world so it is best to avoid it where they can. The Treeminders do, however, realize that the wasteland is a dangerous place and continue to use manufactured firearms out of necessity, but will avoid it whenever possible.[34][35]

The group has a loose hierarchy. The Tree Father and Leaf Mother lead the Treeminders and uphold the Great One's laws. Branchtenders are guardians of Oasis and keep the hidden vale safe from outside forces, bloomseers are healers and interpret premonitions and saplings are the youngest of the Treeminders and are still learning how to live in Oasis.[36] Long ago, it was agreed that Tree Father and Leaf Mother hold equal say over the group, which has led to the schism facing Oasis as of late.[37]

Anyone not affiliated with Oasis or blessed by the Great One is usually turned away from the village and denied entrance.[38][39] Occasionally, Harold insists that the Treeminders let an individual into their home, but this is only done when the outsider has something to offer the Treeminders or their god.[39]

The Treeminders appear in Fallout 3. 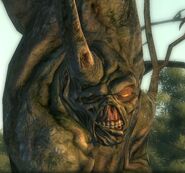