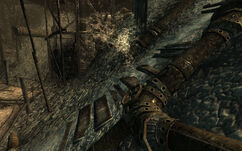 One of the broken pipes

“Well, I'll be... the pressure's up in the plant. It looks like all the leaks have been fixed. Thank you, stranger! Thank you!”— Walter after fixing the pipes

Treatment is an unmarked quest in Fallout 3.

When asked "What needs to be done around here?", Walter asks for the broken pipes around Megaton to be fixed. When asked why he can't fix them, he says he hasn't got the time and he needs to keep an eye on the plant.

The pipes require a Repair skill of at least 30 to fix them.

The pipes that have to be fixed are leaking water. The locations are as follows:

A glitch has been encountered when you finish fixing the pipes and have chosen to not sell scrap metal for caps. If you leave and come back it will give you the option to fix them again, but since you already fixed them you can choose the option again to get 400 caps instead of 200. [verified]

Retrieved from "https://fallout.fandom.com/wiki/Treatment?oldid=3190664"
Community content is available under CC-BY-SA unless otherwise noted.
... more about "Treatment"
RDF feed
Has platform
PC +, Playstation 3 +  and Xbox 360 +