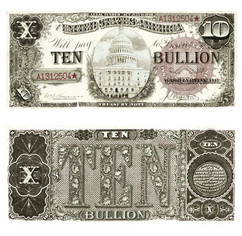 Treasury Notes are miscellaneous items in the Fallout 76 update Wastelanders.

Treasury Notes can be exchanged at a gold press machine for 10 gold bullion each. Up to 20 notes may be exchanged every 20 hours, with the clock resetting after the first exchange of the new 20-hour period.

After the completion of the Wastelanders main questline, Treasury Notes are rewarded for completing events and daily Wastelanders quests.

Retrieved from "https://fallout.fandom.com/wiki/Treasury_Note?oldid=3471192"
Community content is available under CC-BY-SA unless otherwise noted.