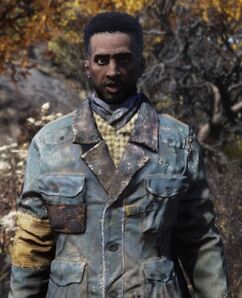 “Woah. You're not Crane. The hell's going on here?”— Treasure hunter

The treasure hunter is a man living in Appalachia in 2103.

The unnamed treasure hunter once knew Crane, before he turned into a Scorched. Upon hearing a broadcast advertising "Crane Treasure Hunting Inc.," the treasure hunter will appear at the player character's C.A.M.P. expressing confusion. After being responded to, he will travel to The Wayward and respond accordingly depending on how he was treated and responded to.

The treasure hunter appears only in Fallout 76, introduced in the Wastelanders update.

Retrieved from "https://fallout.fandom.com/wiki/Treasure_hunter?oldid=3475044"
Community content is available under CC-BY-SA unless otherwise noted.