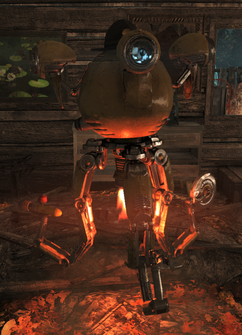 Scout Leader Treadly is a Mister Handy operating at Dolly Sods wilderness in Appalachia in 2102.

Treadly is one of the Pioneer Scout leaders still operational in Appalachia. He is the former assistant to an entomologist[1] who can create insect repellent for new scouts if they bring him the appropriate ingredients.

Meeting up with Treadly at the Dolly Sods wilderness in The Mire triggers the quest "Stings and Things" as part of the requirements to complete "The Order of the Tadpole" and be promoted to Possum in the Pioneer Scouts. Doing so unlocks the ability to craft Insect repellent at a chemistry station.

Scout Leader Treadly appears only in Fallout 76, introduced in the Wild Appalachia update.

Retrieved from "https://fallout.fandom.com/wiki/Treadly?oldid=3229429"
Community content is available under CC-BY-SA unless otherwise noted.