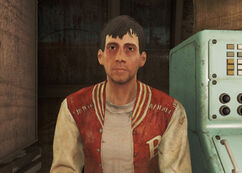 Travis Miles is the radio host for Diamond City Radio in 2287.

Travis has a personality lacking in confidence, despite him being a radio host. Before the events of Confidence Man, Travis will constantly mumble and trail off on Diamond City Radio, and may sometimes shout maniacally (e.g. "OH WE'RE GOING TO DIE!")

Travis's confidence can be changed in Confidence Man, where the Sole Survivor can help Vadim Bobrov to help Travis fight his fears. He has romantic feelings towards Scarlett who works at the Dugout Inn.

Travis appears only in Fallout 4.

Retrieved from "https://fallout.fandom.com/wiki/Travis_Miles?oldid=3456623"
Community content is available under CC-BY-SA unless otherwise noted.