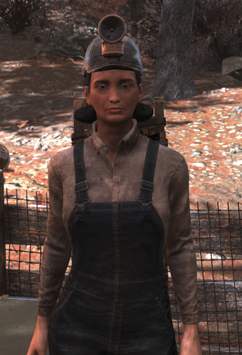 Traveling merchants wander Appalachia in search of items to buy and sell. They may be randomly encountered at one's C.A.M.P., where they can be interacted and bartered with. If an Ally is residing at the C.A.M.P., the traveling merchant will mention that they were talking to them before the player character's arrival.

Traveling merchants can be male or female, as well as human or ghoul. Their appearances are randomly generated.

Traveling merchants appear in Fallout 76, introduced in the Wastelanders update. 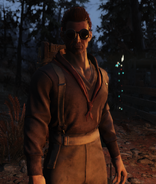 Possible appearance, male human
Add a photo to this gallery
Retrieved from "https://fallout.fandom.com/wiki/Traveling_merchant_(Wastelanders)?oldid=3389586"
Community content is available under CC-BY-SA unless otherwise noted.