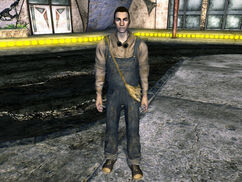 188CivilianHopeful.txt (188 trading post)
VHDCrowdCivilian.txt (You'll Know It When It Happens)

Travelers are citizens visiting the New Vegas Strip in 2281. These tourists, the majority of who being sworn NCR nationals, journey to Vegas with hopes of striking it rich.

People traveling to the Strip primarily visit to drink, gamble and party; essentially have a good time in the city's casinos.

Through a deal made between top NCR politicians from Shady Sands and local supporters of Mr. House, the Las Vegas Strip, part of the city now known as New Vegas, officially opened to tourism in 2274.[1] Eventually, the news of the grand opening of the Strip reached New California, a miracle to the majority of the NCR's poorer denizens, who had extreme desires of striking it rich at the tables. Traversing the ruins of the pre-War Interstate 15, wealthy gamblers and middle-class civilians alike flocked to the jewel of the desert known as New Vegas to seek promising hopes of a vast fortune.[2]

Some came to Vegas just for the drinks, girls, and parties, but a few people played a single round of slots without thinking twice. These poor decisions resulted in the loss of their life savings. Being chased out of the city by the local families for gambling debts prove not to help much for the now-broke NCR nationals, who are left with no choice but to sell the clothing on their backs and engaging in begging for caps, in order to scrape enough funds for the home trip.[3]

The NCR Army had been granted clearance to lead a program to establish camps to cater for the refugees banished from Vegas, yet with varying degrees of success.[4][5]

Retrieved from "https://fallout.fandom.com/wiki/Traveler?oldid=3227410"
Community content is available under CC-BY-SA unless otherwise noted.