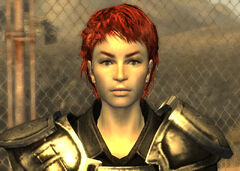 “Why does ghoulification have to be so unfair?”— Die-ary of Trash, entry 3

Trash is a deceased woman found in the nuclear test shack in 2281.

Trash decided to move into the abandoned shack at the old nuclear test site so she could become a ghoul because she was tired of her life. After a few weeks, nothing was happening until she noticed some of her skin coming off and her hair falling out. Unfortunately, her optimism got the best of her, and instead of ghoulification, she succumbed to fatal radiation poisoning. Her accounts can be found in the three separate "Die-aries" located in the shack: entry one, entry two, and entry three.

She is a reference to the character Trash in the film Return of the Living Dead.

Retrieved from "https://fallout.fandom.com/wiki/Trash?oldid=3125632"
Community content is available under CC-BY-SA unless otherwise noted.