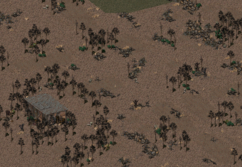 The trapping grounds are to the south of Klamath, where geckos and golden geckos reside.

The entrance from Klamath Downtown is located at the northern edge of this district, which is primarily a sparsely-forested area of wilderness. The only structure is a small shack at the southern end, where Whiskey Bob keeps his still. In the shack, the Chosen One can find firewood and some booze.

The trapping grounds appears only in Fallout 2.

Retrieved from "https://fallout.fandom.com/wiki/Trapping_grounds?oldid=3406062"
Community content is available under CC-BY-SA unless otherwise noted.