The Trappers were a gang of raiders located in Appalachia.

The Trappers were one of the five raider groups in Appalachia. They differed from their counterparts in that they preferred hunting and camping, and enjoyed setting traps,[2] particularly favoring explosive bait. This bait, invented by Chuck, was effective in stopping the Responders' tracker dogs from following their trail after raids.[3]

The Trappers decided to build their camp near the Devil's Backbone, a rock formation just outside the pre-War town of Huntersville. They chose this rural location so they could watch over any traffic on a nearby road[2] - preying on travelers coming from the East - yet still having access to plentiful game to hunt.[4]

For a long time, the group avoided Huntersville due to fears of the quarantined town and its contaminated water. However, at some point, the group began to hear a lot of noise coming from the town. To determine the source of the noise, the gang's leader, Walter Griswold, sent a scout. The scout soon returned, reporting of "some big 'ol green 'uns" occupying the town. In disbelief, Griswold ordered the scout to accompany him to the town, so he could see for himself. They arrived in time to see the Brotherhood of Steel advancing on the town and attacking the super mutants that occupied it. Eventually, Griswold believed the Brotherhood was losing the battle, and he and the scout fled back to their camp.[4]

Griswold began to record himself, explaining what happened in the town, and asking the Cutthroats' gang leader David Thorpe for assistance. Before he could finish recording, the Trappers' camp was attacked by super mutants.[4] This attack was ultimately repelled, and the Trappers began to plan for a counterattack on the super mutants in Huntersville, though they waited for reinforcements from the other raider gangs. These reinforcements never arrived,[1] either because Thorpe never received Griswold's call for help (Rose claims she and the Cutthroats never heard what happened to the Trappers) or because the other raider groups were already spread too thin and were unable to provide assistance.[2]

The Trappers were attacked again by the super mutants. This time, however, the raid was more damaging to the gang: Griswold, as well as other members of the Trappers, were abducted and brought back to Huntersville. Chuck and other survivors of the raid felt betrayed by the lack of reinforcements from the raider alliance, and ultimately fled the area.[1] 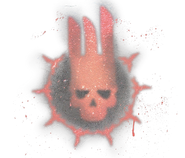 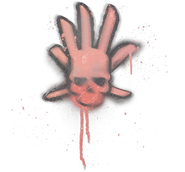 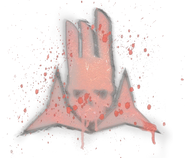 The Trappers are mentioned only in Fallout 76.