The trapper's shack is a shack with a basement in Point Lookout in 2277, and is inhabited by around half a dozen swampfolk.

The main section of the shack has a similar layout to other shacks in Point Lookout with the exception of a large number of traps in and around it and an unusual basement.

In the shack's basement, there are two connected cages, with a swamplurk in one and swamp ghouls in the other. They are hostile towards one another. An electric switch on the table will open a door between the cages. There is also a workbench off to the left.

The trapper's shack appears only in the Fallout 3 add-on Point Lookout.

The basement, with swamp ghouls fighting a swamplurk 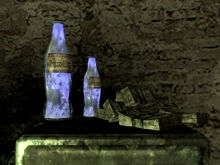