The unidentified transport plane is a vehicle that appears in Fallout: New Vegas.

The transport plane is a light green, double folding wing aircraft. Its design would most likely allow for easier storage of the aircraft in hangars and on the runway. Though no longer functioning, the planes would have most likely served several dozen passengers per trip comfortably before the Great War.

Several can be found at the New California Republic base in Camp McCarran, as well as Searchlight Airport. Another can be found just south of Nipton Road pit stop crashed into a basin, half-submerged in the desert. There is also one crashed airliner atop a mesa in Zion Canyon. 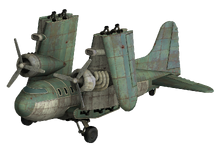 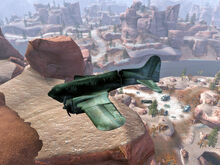 Same plane seen after clipping under the earth; most crashes are actually intact models cleverly arranged in the terrain geometry
Add an image to this gallery
Retrieved from "https://fallout.fandom.com/wiki/Transport_plane?oldid=3190189"
Community content is available under CC-BY-SA unless otherwise noted.