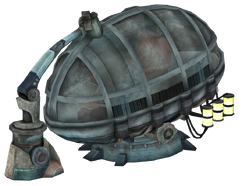 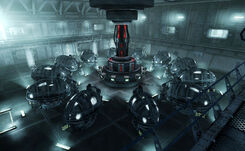 Circle of loungers in Vault 112

A Tranquility Lounger (named Visiontrons in Fallout 3 concept art[1]), and also referred to as an immersion recliner, is a virtual reality-based stasis device. Although the Tranquility Lounger is apparently able to keep its occupant alive indefinitely (in particular, halting or at least slowing the aging process), there will be some effects, and eventually the user will be too weak to survive without the pod's life-support system. The loungers are designed for civilians, and injury or death occurring within the simulation does not harm their actual body; this safety feature can be disabled and avatar death will result in massive user cardiac arrest. The loungers do measure vital signs of the occupants which can be viewed by people outside of the simulation. One case in particular, Old Lady Dithers, has an alarmingly high stress level - talking to her within the simulation indicates that she has become aware of the virtual reality and has gone somewhat insane.

As mentioned above, the Tranquility Lounger is used to gain access to a Vault-Tec prototype simulation. The virtual reality itself was designed by Stanislaus Braun, who uses the simulation to satisfy his own sadistic urges, apparently on the same engine used by Virtual Strategic Solutions used for the Anchorage Reclamation simulation. The simulation runs on a Think Machine 3600r mainframe.

The loungers are largely self-contained and the Vault has been operating without outside human intervention for over 200 years. There are, however, several robobrains which tend to the machines and provide jumpsuits upon request. The lounger's method of operation is unknown - two monitors surround the user's head and these can be seen showing images of the current simulation, but this would hardly be enough to create a believable virtual reality.

The loungers can only be found in Vault 112, and a Vault 112 jumpsuit is required to enter them. Stanislaus Braun was responsible for their installation, and has been running various simulations with a number of unwitting participants since before the Great War. The simulation's current active program, Tranquility Lane, has been running for approximately 170 years (presumably including many resets). Twelve loungers are on the main floor of the Vault, although only nine of these were initially occupied. Braun also has a personal lounger in his office and has disabled the ability for other users to exit the simulation. By the time the Lone Wanderer visits the Vault, only one lounger is available - one empty lounger is broken and the other is occupied by your father.

Tranquility Loungers only appear in Fallout 3

According to pre-release concept art,[2] the Tranquility Loungers in Vault 112 were hooked up to a Simtek 6000 supercomputer. 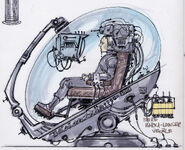 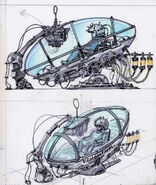 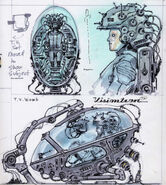 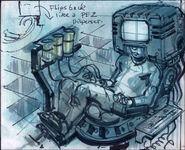 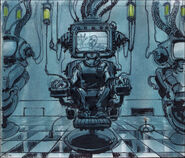 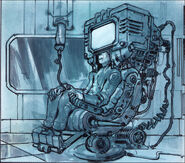 Retrieved from "https://fallout.fandom.com/wiki/Tranquility_Lounger?oldid=3119017"
Community content is available under CC-BY-SA unless otherwise noted.