Tranquility Lane is a virtual reality simulation housed in Vault 112, created by Dr. Stanislaus Braun.[1] The Lone Wanderer is tasked with an escalating series of violent tasks ranging from making a child cry to killing residents. The tasks are given by a little girl named Betty, who in turn will free the Lone Wanderer's father, James, who is trapped in dog form.

As an alternative to completing the violent tasks, the player character may activate a failsafe, which will irrevocably kill everyone with the exception of Betty, James, and the Lone Wanderer. Both solutions result in the release of the Lone Wanderer and their father from the simulation.

The following are the residents that live in Tranquility Lane:

Betty will task the Lone Wanderer to do the following:

As soon as the Tranquility Lounger pod opens, James will walk to the Lone Wanderer and begin a conversation. He had intended to find some holotapes, memos, or even experiments from Braun related to the G.E.C.K., but what he found was Braun who trapped him in Tranquility Lane as a dog. James indicates he'll be returning to Rivet City to meet with Dr. Li and resume Project Purity. This ends the quest and begins The Waters of Life. Once Tranquility Lane is exited, it cannot be accessed again.

In an August 2020 interview, Emil Pagliarulo, who worked on Tranquility Lane, and Jeff Gardiner, the lead producer at Bethesda Game Studios, both stated that they consider Tranquility Lane to be one of their favorite quests throughout the Fallout series. Gardiner cited Tranquility Lane as a good example of the dark humor in Fallout, as well as how even the most outlandish of concepts can work within the Fallout universe. Pagliarulo went on to talk about how the ratings system in the United States, specifically the limitations on killing children, influenced what could and could not occur in the Tranquility Lane simulation.[3]

Braun in his pod

Dad in his pod 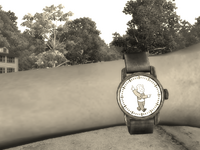 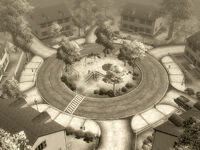