Start a Wiki
The Pitt location 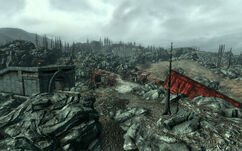 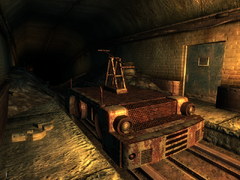 “I'll meet you up by the tunnel that leads to the Pitt. You go get whatever you'll need for the trip.”— Wernher

The train tunnel is a metro tunnel added with the Fallout 3 add-on The Pitt and is located northwest of Fort Constantine.

It was converted into a makeshift camp so slavers can periodically sell slaves to the Pitt raiders.

A small outside area, inhabited by slavers and Pitt slaves, with a slave pen and living quarters. The interior consists of a small tunnel, with invisible walls preventing the Lone Wanderer from going very far into it. There's a handcar that leads to The Pitt.

This train tunnel appears only in the Fallout 3 add-on The Pitt.

During the dialogue with the newly freed slave, one is given the dialogue option "Your clothes. Give them to me. Now." This is a reference to the movie The Terminator, said by The Terminator after arriving naked, having gone back in time, and encountering some punks.

Retrieved from "https://fallout.fandom.com/wiki/Train_tunnel_(Fallout_3)?oldid=3216273"
Community content is available under CC-BY-SA unless otherwise noted.