A train is a type of vehicle that travels by rail, examples of which can be found throughout the Commonwealth.

Train engines were used for transporting freight in the pre-War United States, used by several different companies across multiple regions.

The train engine consist of an elevated driver's cab and engine suspended high above the track. Some models were automated. It served as an effective mode of rail transport and its use was widespread across the region. Trains transporting freight for NH&M can be found throughout the region. 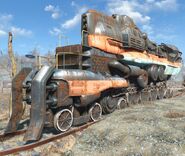 Derelict locomotive located due east of the Starlight Drive In 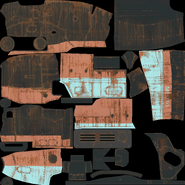