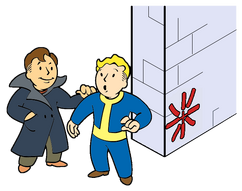 300+ XP
Membership in The Railroad
Deliverer
Deacon as a companion

“So Dez wants me to make you a "tourist". That's what we call someone who helps out with the odd job here and there. What a waste. I'm just going to come out and say this: the Railroad needs you.”— Deacon

Tradecraft is a Railroad main quest and an achievement/trophy in Fallout 4.

The conversation with Deacon will change depending on the answer to Desdemona's question in the previous quest regarding whether the Sole Survivor would risk their life for a synth.

Either way, Deacon has an angle for getting past the usual, year-long procedure of becoming a Railroad agent, suggesting a two-man mission to the Railroad's former hideout in Lexington. Meet him on the city's outskirts to continue the mission.

Outside Lexington, Deacon provides more details on the job, introduces the Sole Survivor to a few railsigns, and tells them the active Railroad countersign ("Mine is in the shop") to use with Ricky Dalton, a tourist they are about to meet. They rendezvous with Ricky, who greets them with the Railroad's sign "Do you have a geiger counter?", to which the player character can choose whether or not to use the countersign. Ricky will then explain that the Slocum's Joe which served as the Railroad's former headquarters is crawling with Gen-1 synths.

After receiving this information, the Sole Survivor has the opportunity to persuade Ricky to provide them with assistance in the upcoming mission via Charisma checks of varying difficulty. Assistance can take the form of extra supplies (Easy), sniper fire when the violence starts (Medium) or an explosive distraction (Hard). Ricky notes that the distraction will likely kill him, at which point the player character can still tell him not to do it and he will resort to providing sniper fire instead. Failing any persuasion attempt will cut off all others, and passing the medium or hard before the easy check will cut off that option as well. If persuaded to do create an explosive distraction, Ricky will walk to near the Slocum's Joe and sit on a large rock and do nothing more. He is highly likely to be attacked by mongrel dogs or Gunners on the way and die.

After speaking to Ricky, Deacon will speak to the Sole Survivor and outline the two options for retaking the Slocum's Joe - a frontal assault or a rear assault via the escape tunnel.

Proceed to the Slocum's Joe front entrance and begin a frontal assault. There is a large field of frag mines at the front of the shop which will first need to be circumvented or disarmed. Once inside, Deacon will give the Sole Survivor the location of the hidden elevator only to realize it has been powered down, forcing the player character to use Option 2, sneaking in through the escape tunnel. (Before update 1.4 it was still possible to enter this way by opening the elevator doors, jumping down the shaft, entering the elevator box via the hatch at its top, and opening the doors at the bottom.)

The escape tunnel will be marked on the map, in a sewer tunnel covered by a thick drape of moss. Upon entering the tunnel, Deacon will give the Sole Survivor more information about the Railroad and the target. After the talk, Deacon will unlock the security door using a terminal and a few passwords he remembers.

Past the door, Deacon will point out a railsign signifying that there is a cache nearby. It is in the back of the tube directly behind the sign. Around here, Deacon will warn the Sole Survivor that they should just run if they ever meet a Courser (provided the player character has not previously fought one in the Hunter/Hunted quest). Ahead, there will be an unlocked terminal, which one can use to turn off the spotlights and turrets in this area. Below is a group of synths that need to be passed or killed. If the group is sneaked past, one can turn on the defenses that will start firing immediately against the next group of synths. Shortly after that, the Sole Survivor will discover that the Railroad was using an old Defense Intelligence Agency site as their HQ.

The terminal next to the door leading out of this office area can turn off the tripwires in the next room. Before leaving, grab the fusion core in the room left of where the Sole Survivor first entered and a U.S. Covert Operations Manual on a desk in the room up the stairs. A terminal in this room controls access to two locked areas containing minor loot.

Once entering the last room before the quest marker, Deacon will open the vault and inspect a dead body. There are two hazmat suits and a bottlecap mine in the room before the vault, opposite a weapons workbench. After the inspection, he will offer the "hand cannon" the dead man used and will not take no for an answer. Grab Carrington's prototype from the vault and head towards the elevator. This area has two Stealth Boys, a mini nuke and fusion core which can be looted.

If the Sole Survivor has not yet done so, there are synths and turrets topside which will need to be destroyed. If Ricky is helping, there is a good chance he will be killed providing sniper fire, although he can be saved, but guaranteed to die with the explosive mini-nuke distraction, which wipes out most of the synths. Deacon will suggest that the Sole Survivor and him split up and meet back at the Old North Church.

When the Sole Survivor reaches the church, they find Deacon embellishing their exploits to Desdemona. There is the option to tell Desdemona the truth or pass an easy persuasion check to go along with the lie. Either way, Desdemona is impressed with the Sole Survivor's resourcefulness and extends an invitation for them to join the Railroad. Refusing leaves the offer open, but accepting leads to selecting a code name (or letting Desdemona pick 'Wanderer' after refusing a name twice) and completion of the quest, with Deacon becoming available as a companion.

Retrieved from "https://fallout.fandom.com/wiki/Tradecraft?oldid=3416034"
Community content is available under CC-BY-SA unless otherwise noted.
... more about "Tradecraft"
RDF feed
Has platform
PC +, Playstation 4 +  and Xbox One +