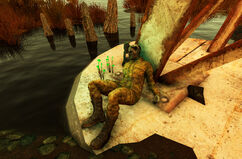 “Discover the fate of the missing hunting party.”

Tracking Unknowns is a side quest in Fallout 76.

Upon getting close to Harpers Ferry, a miscellaneous objective appears with three markers pointing to terminals located at three of the entrances to the town that were fortified by the Free States. If the doors made from the cargo containers are not already opened, there are other access points into the town that can bypass those entrances as they can only be opened by switches from inside the fortifications.

Once able to access one of the terminals, search through the various entries until learning of a group of Free States members, that had been out tracking ghouls and never returned. Their last known location being an area somewhere north of Valley Galleria up on the cliff. Proceed there using the railroad tracks until reaching the sealed tunnel. There is a path up the cliff on the right, where once at the top, there will be some Copper ore and Gold ore veins that can be harvested. If Tanagra Town is marked on the map, fast travel there and proceed from there. Proceed into the area marked on the map, and search for Hardball, a Free States Mister Gutsy watching over the corpses of two of the missing Free States members, Courtney Kelly and Jacqueline Murphy. After giving the player characters a look-over, he requests that they locate a signal booster, travel to Camp Venture to summon a Cargobot to attach the booster to, and then use the signal to find the rest of the missing members using the distress beacon. The booster can be recovered from one of two places, either back in Harpers Ferry, or from Valley Galleria, in the electronics store. Once the booster is recovered, head to Camp Venture, summon a Cargobot using the terminal next to the landing pad, and when it arrives and descends to the pad, attach the signal booster to it. After it leaves, track the distress signal back to a location somewhere near the Southern Belle Motel at the base of one of the large power line towers coming from Thunder Mountain.

Once at the location, find the corpses of the deceased Free States members there, recover what can be found on the bodies of Randy Calloway and Nari Samir, including a prototype hazmat suit, and learn that the rest of the missing members under Duncan McKann are somewhere in the sewers beneath the Dyer Chemical facility. Head over there and find the entrance to the sewers, located near the river on the western side, dodging the Mister Gutsy, Protectron, and Robobrain robots that patrol the facility, possibly even a Sentry Bot.

Once in the sewers, fight past the feral ghouls until one begins locating the other members of the missing party, including Duncan McKann, Sara Samir, Kendyll Sims, and Lucy Harwick. Recover the holotape from the body of Lucy to learn of what happened with Duncan's group that led to their demise, and the quest will complete, rewarding the player characters with the Pyrolyzer, a unique flamer with a legendary effect on it.

The missing group party consists of the following members:

Retrieved from "https://fallout.fandom.com/wiki/Tracking_Unknowns?oldid=3488797"
Community content is available under CC-BY-SA unless otherwise noted.