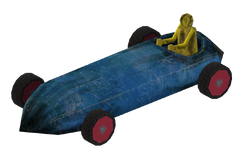 The toy car is a miscellaneous item in Fallout 3 and Fallout: New Vegas.

Toy cars are a common, semi-valuable junk item. In Fallout 3 they are used in the construction of the dart gun and as Rock-It Launcher ammunition. In Fallout: New Vegas it serves only as a miscellaneous item with no known uses. The toy itself is a blue diecast metal race car, with four rubber tires and a yellow generic driver in the cockpit.

This item also may appear in random containers in the Capital Wasteland or be bought from Crazy Wolfgang.

Retrieved from "https://fallout.fandom.com/wiki/Toy_car_(Fallout_3)?oldid=3168702"
Community content is available under CC-BY-SA unless otherwise noted.