The Toxic Valley is one of the six regions of Appalachia.

The region known to survivors as Toxic Valley lies due north of the Forest, covered by a thin, industrial white powder and filled with filthy, polluted water sources. The Grafton Steel Mill, sitting amidst the desolation, was the engine driving the economic development of Grafton, the central city of the valley.[1]

Grafton entered a steep decline as the pollution from the steel mill ruined the environment and polluted the rivers, while the workers started striking against the creeping automation that was leaving them jobless and their families penniless. The pollution is kept in check by the Grafton Dam. It was built to provide power to the steel mill and is now filled with the polluted waters of the Toxic Valley.[2] After the Great War, the combined pollution and nuclear fallout filled the white wastes of the Toxic Valley with all manner of horrifying beasts, prowling the stretches of devastated waste in search of the few hardy plants that survived the blight or prey to consume.[3]

Grafton Lake and other deadly waters are home to all manner of mutated, aquatic beasts.[4] The area also has a large river that leads to the Grafton Lake. The Toxic Valley contains many points of tourism including Clarksburg Shooting Club, Hemlock Holes, Pioneer Scout camp, and Wavy Willard's Water Park.

The Toxic Valley is in the northwestern portion of the Appalachia map. Locations in the region include:

“The far northwestern Region of Appalachia is covered in a lightly irradiated blanket of white toxic materials. Much of the landscape (most noticeably the rivers and lakes) is now a choked mess of orange filth and noxious clouds; the environment is unpleasant, rough going, and the tree cover has been ripped away. Now the atmosphere is dead. That's not to say nothing has survived, but the non-robotic entities you'll meet as you visit this stark and unforgiving depression aren't going to be trading anything with you but diseases and savage wounding. As you discover more locations, prepare to visit dilapidated farmsteads, lakeside cabins, and a scout camp where poisonous effluent has replaced clear waters. The main town is Grafton, which is in a rough state, even before reports of its headless monster were confirmed. Seek small respite at the Wavy Willard's Water Park, where there's some frivolity to be had, and ignore the golf course at Hemlock Holes. Instead, spend time cultivating your drive to mine resources at the nearby workshop. There's also tough battles at close quarters with denizens inside the penitentiary along the southern border, a few scattered Raider camps to uncover, and a crashed satellite to the northeast. Finally, pay some respects at the historic sites along the eastern edge of this forsaken region.”— Fallout 76 Vault Dweller's Survival Guide p.353
“The region known to survivors as “Toxic Valley” is covered by industrial white powder and polluted water sources. The lake and other deadly waters of the Toxic Valley region are home to all manner of mutated, aquatic beasts. Above the fetid lake, Grafton Steel Mill was the center of economic development for the town of Grafton, and its large, industrial machines remain relatively intact. Grafton was built on the shores of the Tygart Valley River. It was a hub for shipping prior to the Great War, thanks to having both water and railroad access. Now it seems deserted and inhospitable. Straddling the boundary between Toxic Valley and the Forest is Grafton Dam. Built to provide power to the Steel Mill, the dam is now filled with the polluted waters of Toxic Valley.”— Fallout 76 Vault Dweller's Survival Guide

The Toxic Valley appears in Fallout 76. 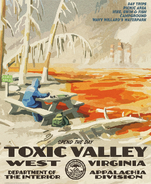 After a nuclear detonation