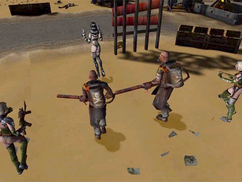 Town Under Attack is a quest in Fallout: Brotherhood of Steel.

After escaping the crater, the player finds Carbon under attack by vengeful raiders. Armpit uses his last breath to urge the Initiate to "help all those stupid fucking people."

The next blinking indicator will be the door to the warehouse where Vidya has rounded up several survivors. She will refuse to let the player in until all attacking raiders are dead and also asks the player to save as many civilians as possible (see: Rescue Innocents).

This quest will take you through all the sections of Carbon (Carbon East, Carbon North, Carbon West). Each area has about 20+ raiders to dispatch (their attack dogs count as raiders as well and are including in that number) and around 10 civilians to save.

The player will also encounter raiders wielding flamethrowers. There are two reasons that these guys should be attacked with ranged weapons. The first being the obvious avoidance of fire (which remains on the player for a short time unless stop, drop and roll is employed). The second is that they will blow up even if you bludgeon them to death with a sledgehammer, damaging you with an explosion and catching you on fire if you're two close. Of course, they also blow up on any nearby raiders which makes them as much of a help as a hunderance.

After making your rounds through the town and kill all raiders, you can return to Vidya. The final map directly links back to the town center at the end so there's no need to back track. When you arrive at the warehouse you will receive 600 bottle caps and 100 Experience Points.

Add a photo to this gallery
Retrieved from "https://fallout.fandom.com/wiki/Town_Under_Attack?oldid=2197567"
Community content is available under CC-BY-SA unless otherwise noted.