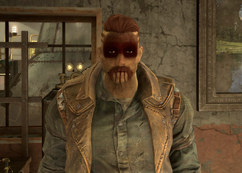 Tower Tom is the leader of a group of raiders at the Beantown Brewery in 2287.

A very muscular raider. Tom is the leader of a group of raiders based out of the Beantown Brewery. He has ambitions of eventually taking the Corvega assembly plant or D.B. Technical High School.

At some point when his gang's food supplies ran low, he attempted to raid a federal reserve held by two sisters that went badly, but two of his crew managed to capture one of the sisters, Lily Tourette, as a hostage. After having Lily convince her sister, Red Tourette, that she had indeed been taken by letters written by Lily, food was sent to Tom's crew to keep her alive. However, after several shipments, Lily managed to get loose and Tom accidentally killed her while trying to aim for her leg. Tom stashed her body inside some unspecified vats, saying she 'improved the flavor' (heavily implying that she was mixed in with the alcohol). To hide this deed, Tom spread rumors of a huge caravan to temporarily lure his crew out.

Tom then tried to continue deceiving Red by writing letters under the pretense of Lily, so she would send more food to his crew. However, he was unable to fully forge the letters, making Red suspicious.

If the Sole Survivor takes out Tower Tom before attacking Red Tourette, Red's terminal has an updated log saying that she thinks Lily has escaped from Tom.

If the Sole Survivor takes out Red before clearing Beantown Brewery, Tom's terminal has a log related to it. There is also a log detailing if the raiders at Corvega and D.B. Technical High School are taken out by the Sole Survivor.

Tower Tom had sent out Sparta to look for food and supplies to the BADTFL regional office,and it is also possible that the raiders Bull and Gouger work for Tom as they bring Vadim Bobrov to Beantown Brewery, Tower Tom's hideout.

Tower Tom appears only in Fallout 4.

Retrieved from "https://fallout.fandom.com/wiki/Tower_Tom?oldid=3181694"
Community content is available under CC-BY-SA unless otherwise noted.