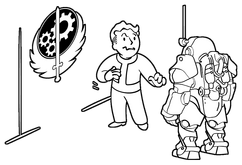 “Finish familiarizing yourself with the Prydwen's personnel, then meet me on the Flight Deck.”— Arthur Maxson

Tour of Duty is a Brotherhood of Steel main quest in Fallout 4.

In order to become an effective part of the Brotherhood, Elder Maxson has ordered the Sole Survivor to tour the Prydwen and get to know her crew. There is no strict order in which one has to meet each individual. One can find Proctor Ingram near the power armor station (the set of power armor can be found in Bay 3) and with a medium speech check the player character can ask her about her missing legs, which opens up opportunities to further the conversation.

Locate Proctor Teagan at the supply store. Aside from the impressive array of weapons he sells, the Sole Survivor can ask him about extra work opening up the radiant quest Feeding the Troops. Locate Proctor Quinlan at his office. Speak with him and one has the option to locate technical documents for him, opening up the quests Getting Technical and Learning Curve. Locate Knight-Captain Cade in the sickbay. Speak to him and complete a medical check-up which involves answering several questions. The Sole Survivor is able to return to him whenever in need of medical assistance.

The quest is complete once all four crew members have been met, unlocking the player character's ability to access their services and related quests.

Killing all NPCs aboard the Prydwen will fail the quest. If one travels to Diamond City afterward, a few NPCs will appear in the bound pose and cannot be interacted with. All other characters, including companions, will be hostile.[verification overdue]

Retrieved from "https://fallout.fandom.com/wiki/Tour_of_Duty?oldid=3415964"
Community content is available under CC-BY-SA unless otherwise noted.
... more about "Tour of Duty"
RDF feed
Has platform
PC +