Discard to recover all HP and become immune to damage for the rest of the turn
...

“When you are tough, you take less damage. Each level of this Perk will add +10% to your general damage resistance.”— in-game description, Fallout

Toughness is a perk in Fallout, Fallout 2, Fallout 3, Fallout: New Vegas, Fallout 4, Fallout Tactics and Fallout: The Board Game.

With each level of this perk, you will add +10% to your normal Damage Resistance (not Laser, Fire, Plasma etc).

With this perk, you gain +10% to overall Damage Resistance, up to the maximum of 85%. You will also gain a unique dialogue option when talking to Ted Strayer during the quest "You Gotta Shoot 'Em in the Head."

With each rank of this perk, you gain a permanent +3 to your Damage Threshold.

“If nothing else, you can take a beating! Assuming you'll be dealing with more than simple foul language hurled in your direction, gaining a permanent bolster to your Damage Resistance is just like having a thick skin of armor. A fantastic way to spend a Perk Point or five.”— Fallout 4 Vault Dweller's Survival Guide description

Once obtained, it can be discarded to regain all HP and, until the end of turn, the player character will suffer no additional damage.

The image for this perk is a reference to Superman, especially in Fallout, Fallout 2 and Fallout Tactics since the Vault Boy also has the Superman hairstyle. 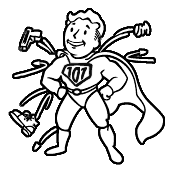 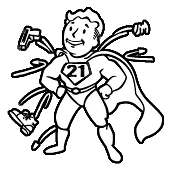 Fallout: New Vegas perk image
Add a photo to this gallery
Retrieved from "https://fallout.fandom.com/wiki/Toughness?oldid=3456854"
Community content is available under CC-BY-SA unless otherwise noted.