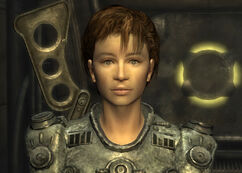 “Hi there. Looking to spend some caps?”

Knight Torres is the Quartermaster of the Mojave Brotherhood of Steel in the Hidden Valley bunker in 2281.

Knight Torres is in charge of the armory found in the bunker. She will sell items to the Courier once Elder McNamara gives the go-ahead.

Torres is apparently searching for a lost laser pistol, and will ask the Courier for help in retrieving it.

Note: weapons are only shown if they are new additions according to level. In the case of level 4, weapons listed are all the beginning weapons available in her inventory.

Retrieved from "https://fallout.fandom.com/wiki/Torres?oldid=3107429"
Community content is available under CC-BY-SA unless otherwise noted.