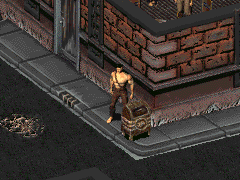 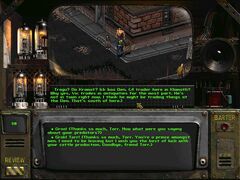 “Bugmen take moo-moos at night. Torr scared! Hep Torr? (Well, as I said, they are nocturnal in their feeding habits. I sure could use some assistance in guarding the brahmin. Will you kill any bugmen that you see near the brahmin?)”

Torr Buckner is a resident of Klamath in 2241.

A mentally challenged member of the Buckner family, Torr is a large man covered in dust with a blank smile on his face.[1] Uncannily strong, his family uses him for all sorts of menial work, including guarding their brahmin, or "moo-moos" as Torr calls them. His low Intelligence makes him an easy victim for cattle rustlers such as the Dunton twins. He speaks in short simple sentences due to his low intellect.

While useless for normal-intellectual characters to attempt talking to, low Intelligence characters have the chance to hold an intelligent conversation with Torr, in which they can ask about the goings on in Klamath.

Torr Buckner appears only in Fallout 2.

Torr in Guard the brahmin

Torr in Rustle the brahmin
Add an image to this gallery

Retrieved from "https://fallout.fandom.com/wiki/Torr_Buckner?oldid=3072827"
Community content is available under CC-BY-SA unless otherwise noted.