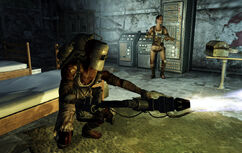 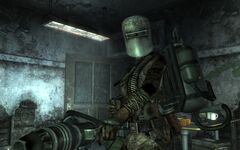 Torcher is a named raider who resides in the MDPL mass relay station in 2277.

Once under the Brotherhood of Steel's protection, the MDPL mass relay station is now home to a small raider scavenger team under Torcher's leadership.[1]

They carry a flamer and wear a unique raider arclight helmet called "Torcher's mask" and a set of raider badlands armor. They have nothing else in their inventory unless the Lone Wanderer has the Lawbringer perk, then Torcher will also carry a finger.

Torcher appears only in Fallout 3.

Retrieved from "https://fallout.fandom.com/wiki/Torcher?oldid=3186357"
Community content is available under CC-BY-SA unless otherwise noted.