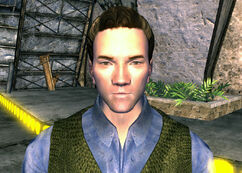 Tops promoters are men working for the Tops casino in 2281. Their sole purpose is to attract gamblers, travelers and drinkers alike.

They stand outside the Tops casino. Despite their name, they don't promote anything until Hadrian is recruited for the Talent Pool quest. This is the only act they'll talk about and the only time they'll converse with the Courier. Their dialogue consists of insulting the Courier, then bragging about how it was their idea to do so to promote an insult comic. Their outfits also change every time the Courier enters a gate on the Strip.

Old Ben used to be a promoter for the casino.

Retrieved from "https://fallout.fandom.com/wiki/Tops_promoter?oldid=3331620"
Community content is available under CC-BY-SA unless otherwise noted.