Top of the World terminal entries

Fallout 76
“The Top of the World was originally an enormous ski lift station, complete with shops and restaurants at its peak.”— Loading screen

The Top of the World is a location in the Savage Divide region of Appalachia. Before the Great War, it was part of a ski resort.

Prior to the Great War, the Top of the World was a famous West Virginia tourist attraction. The giant red thumbtack-shaped landmark was part of the Pleasant Valley Ski Resort, and originally served as an enormous ski lift station that included shops and restaurants on its higher levels.[1][Non-canon 1] It was also the location of the Top of the World Radio broadcast.

After the war, many rich tourists survived at the resort and its facilities. Many of them were counting on the government to rescue them, not realizing there was no government left. Afraid of looters, they locked away their most valued possessions and divided up the key. As the supplies were running low, they sent an envoy to Charleston for help but were turned down. This led to the radicalization of the group, turning them into the Raiders, with the Cutthroats gang being the one taking the Top of the World and its surroundings as their home. Becoming their headquarters and turning it into a settlement of sorts, they erected small defenses and dropped mines underneath the superstructure.[Non-canon 1]

At some point prior to 2103, all of the raiders had been killed or fled the area, leaving behind Rose, a Miss Nanny programmed to mirror the likeness of Rosalynn Jeffries.

In front of the elevator is an overseer's cache, which contains the overseer's log holotape. There are many raider styled buildings set around it. A few other cabins can be found in the surrounding area, which served as lodging for visitors pre-War but has since been overrun by super mutants.

This level was a shopping mall circular in shape on the second floor. Many windows are boarded up and the level is filled with shops, some of which still contain remnants of their products and robot employees. The shops are distributed around the circle, with hallways between each, circling around the perimeter. There is a door connecting each shop with the respective halls (between the outer perimeter hallway and the central mezzanine area). The radial hallway between the A La Chez Burger and the Peak Condition is blocked, as is the outer perimeter hallway behind the Peak Condition. There are two weapons workbenches and an armor workbench located in one of the retail spaces. There is a tinker's workbench located in the Diamond Dust jewelry store. This floor contains various Scorched enemies that roam the area.

The stage and the clothes shack each contain a potential Vault-Tec bobblehead spawn point, with three potential magazine spawns near each shack and the stage. Clockwise, the businesses are:

The observation level is the top floor at the Top of the World. The raider robot Rose can be found here. It houses radio equipment which Rose uses to run Raider Radio. A cage containing Hank Madigan's corpse can also be found here. This level cannot be accessed until the Signal Strength quest is completed.

The Top of the World appears in Fallout 76.

The Top of the World and Pleasant Valley are based on the real world location of Snowshoe Mountain Ski Resort in Snowshoe, West Virginia. The Top of the World building has a check-in desk for the resort, lodging, and houses one of the ski equipment rental facilities.[2] 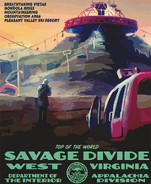 Top of the World's quest sprite

On a cloudy day

The Top of the World radio antenna 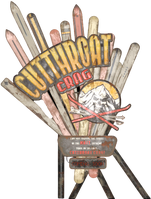 Potential Vault-Tec bobblehead location on speaker on the mezzanine level 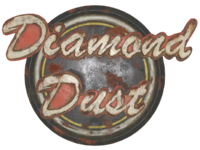