Too Good to Be True

“That abandoned Vault stocked with supplies? That's Deathclaw territory now. How he got in there, nobody knows, but you won't get to the stash without facing him first. Time to break out the big guns!”

Too Good to Be True is a single-stage overseer quest in Fallout Shelter.

This quest takes place in a standard, randomized vault. Most of the rooms will contain minor enemies, limited to mole rats and radroaches with the occasional broodmother or irradiated radroach respectively. These are at a comparatively low level considering the requirements, causing minimal danger to the party.

One room contains a major alpha deathclaw which deals extreme amounts of damage, able to one-hit kill even a level 50 dweller all leveled at max endurance in one hit if they are not near maximum health, taking well over half the hit points with each blow. The deathclaw also has a very large HP pool, even three x5 critical hits will take less than half of it away.

Prepare for a prolonged battle and always double stimpak your direct enemy dweller after each hit is taken. It is therefore advised to bring with you the maximum 25 stimpacks for this quest and dwellers who were fully trained before leveling are preferable.

After finishing the fight it is possible to collect the Mr Handy and the lunchbox from the next room and explore the rest of the vault for loot. 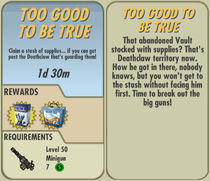 Rewards
Add a photo to this gallery
Retrieved from "https://fallout.fandom.com/wiki/Too_Good_to_Be_True?oldid=3419324"
Community content is available under CC-BY-SA unless otherwise noted.