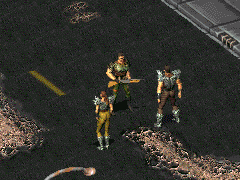 Deputy Tony Fry is the right-hand man of Justin Greene, the Hub sheriff.

Fry is aware of the growing criminal element in the settlement brought upon by Decker, owner of the bar the Maltese Falcon. However, due to a lack of definitive evidence tying Decker to his criminal proceedings, the justice-minded Hub police is incapable of eliminating him.

As he is unable to take direct action against the Hub's Underground, Fry is left with the job of welcoming newcomers to the city and keeping his eye out for known troublemakers. He also claims to be on the lookout for raiders and other wasteland dangers as well.

From morning (06:00) to evening (18:00), Fry can be found guarding the entrance to the Hub with two other police officers of the Hub. During nightly hours, he can be found in his room at the police station. During this time, Fry can not be spoken to, he will merely groan.

During combat, Fry will only use the items he uses to trade, despite having a large inventory consisting of many other items.

Tony Fry appears only in Fallout.

Retrieved from "https://fallout.fandom.com/wiki/Tony_Fry?oldid=3337156"
Community content is available under CC-BY-SA unless otherwise noted.