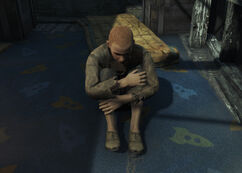 Tony is a male child living in Far Harbor in 2287.

Tony lives outside of the only pub in Far Harbor, The Last Plank. He is the brother of Small Bertha. Their mom, Peggy, disappeared in the Fog, as she tried to look for work on the Dalton farm, and their father Mark is also deceased. The Sole Survivor cannot normally interact with him, as he responds only with sighs and grunts when spoken to.

Tony spends most of his time curled up in the fetal position or sitting near Small Bertha.

Tony appears only in the Fallout 4 add-on Far Harbor.

Retrieved from "https://fallout.fandom.com/wiki/Tony_(Far_Harbor)?oldid=3290256"
Community content is available under CC-BY-SA unless otherwise noted.