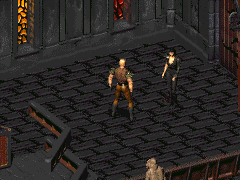 “Hello. I've been evolved by the FEV so that anyone that annoys me dies. Stop annoying me, little man.”

Ton Barracus[1] is a member of the Children of the Cathedral in 2161.

According to Ton, his name is derived from the fact he weighs 2000 lbs (precisely one ton), due to effects from the FEV. He is the enforcer of the Cathedral, and often goes on excursions to kill Followers of the Apocalypse and "other gang types," although he was a former member of the Dead Dog gang himself.

If approached by a female, he will use cheap pick-up lines relating to the effects of how 'huge' he is.

Ton appears only in Fallout.

Retrieved from "https://fallout.fandom.com/wiki/Ton_Barracus?oldid=3253825"
Community content is available under CC-BY-SA unless otherwise noted.