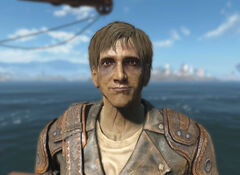 Tommy Whispers, a "heavy" agent for the Railroad, started off as a B team scout. In 2281, he discovered an old DIA facility in Lexington, codenamed "Switchboard," which would later serve as the HQ for the Railroad. He was mentored by Glory and eventually became a heavy agent himself in 2282 and was gifted a custom pistol by Tinker Tom. According to comments made by Desdemona and Glory, he was a stealth expert, attacking from the shadows.

In 2287, the Switchboard was discovered by the Institute and was attacked by a large number of synths. In the ensuing carnage, Tommy closed the door to a secret prototype - protecting it from the invading synths, but sacrificing himself. His corpse is later discovered by the Sole Survivor and Deacon in search for the prototype.

Tommy Whispers appears only in Fallout 4.

Add an image to this gallery
Retrieved from "https://fallout.fandom.com/wiki/Tommy_Whispers?oldid=3296211"
Community content is available under CC-BY-SA unless otherwise noted.