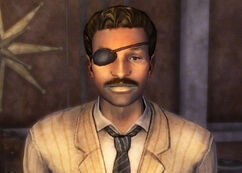 “Hey hey! Welcome, welcome, welcome to the finest entertainment experience in New Vegas! My name is Tommy Torini, and how can I make your night?”

Tommy Torini is a Chairmen talent agent and the manager for the Aces theater at the Tops, living in New Vegas in 2281.

The self-declared "talent manager, show scheduler, and all-around man in charge" of the Aces Theater, as well as one of the founders of the theater,[1] Torini manages the Rad Pack Revue daily, from 8 PM to midnight.[2] However, since Benny had the Singer killed in the graphic novel All Roads, he is looking for additional acts.

Tommy will hang around the Aces theater, but will also get up on stage and dance with others occasionally. He cannot be interacted with while dancing.

Note: His eyepatch cannot be looted, as it is marked as unusable.

Tommy Torini appears in Fallout: New Vegas. He is also mentioned in the graphic novel All Roads.

Tommy Torini bears significant resemblance to American entertainer Sammy Davis Jr., including the missing eye. Sammy lost his left eye in a car collision, but elected to be fitted with a glass eye (after wearing an eyepatch for six months). Likewise, Tommy's 'Rad Pack Revue' is an obvious nod to Frank Sinatra's 'Rat Pack'; of which, Sammy Davis Jr. was the only black member.

Collector's edition playing card
Add a photo to this gallery

Retrieved from "https://fallout.fandom.com/wiki/Tommy_Torini?oldid=3267096"
Community content is available under CC-BY-SA unless otherwise noted.