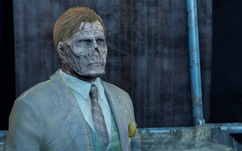 Tommy Lonegan is the proprietor of the Combat Zone arena, living in the Commonwealth in 2287.

Tommy Lonegan is the owner-operator of the Combat Zone, formerly known as the Orpheum Theater of Boston prior to the Great War. A deal made in 2285 with a local raider gang has brought this dapper business-ghoul steady profits, yet has made his fighting club, the Combat Zone, less welcoming to the general public.[1] He doesn't mind the fact that the gang's nature drives away potential customers because they still continue to be loyal patrons, that are willing to place their bets on the party most likely to win.

Tommy Lonegan cooperates with the Institute's Synth Retention Bureau, providing tips on escaped synths in return for caps.[2] He is the current holder of Cait's employment contract, and is compliant with the fact that he will have to let her go, in the event that he loses his current clientele, as he is concerned with the state of her chem addiction.[3]

Should the Sole Survivor kill Tommy's raider patrons, he will offer Cait's contract to them, as without clients she becomes a liability due to not bringing in caps.

Tommy is one of the few ghouls to have a full head of hair, alongside Eddie Winter.

Tommy Lonegan appears only in Fallout 4.

Retrieved from "https://fallout.fandom.com/wiki/Tommy_Lonegan?oldid=3178997"
Community content is available under CC-BY-SA unless otherwise noted.