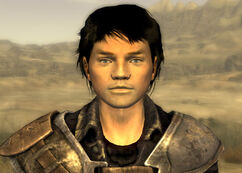 “Did you see that? That crazy bitch attacked me out of nowhere.”

Tomas is a prospector wandering the Mojave Wasteland in 2281.

Tomas approaches the Courier after getting into a gunfight with Jacklyn who had been his traveling companion. It is implied that Jacklyn attacks him for his "Lucky Necklace" which turns out to be made of seven Sunset Sarsaparilla star bottle caps.

Alternatively, Jacklyn may actually win the fight and run over to you, saying how Tomas tried to kill her. She will have all nine Sunset Sarsaparilla star bottle caps on her (the two she had initially and the seven from Tomas's necklace). Whichever one dies can be found dead on the left side of the end of the road.

Retrieved from "https://fallout.fandom.com/wiki/Tomas?oldid=3328145"
Community content is available under CC-BY-SA unless otherwise noted.