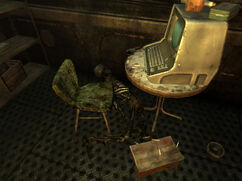 Tom McMullin was the supervisor of the facility known as The Pitt's supply plant before the Great War.

Despite his best efforts to stall the management-induced plans to replace his workers with protectrons, his superiors finally caught on to his deceptions and ordered the plant to be vacated by human personnel. The workers mistakenly believed McMullin had been helping the management with replacing them all along to save his own job and planned to take out their frustration on him. Tom suspected this though and tried to escape.

Although his escape failed, he managed to flee to a small room where he locked himself in, intending to wait for the workers to leave. The workers however did not want to leave until he came out. He begged them to leave before the new protectron workforce arrived but they did not take him seriously. When the robots entered the plant they killed all workers; McMullin briefly left his room when he heard the noise but went back in again shortly after, horrified by what he had witnessed. Shocked, he sat and listened to the cries of the dying workers, unable to do as much as letting those into his room who banged against the door.

After all the workers were dead, Tom McMullin did not want to leave the room again until the robots were gone. As a skeleton is found inside the locked room with the terminal telling his story, it can be assumed he died in there, either by starvation or suicide.

As soon as the player character finishes reading his personal logs, a protectron will spawn just outside the door. It is not hostile, even though it is stated that all personnel must have an ID and the workers were killed in the very same hallway it spawns in. This may be because it recognizes the Lone Wanderer's Pip-Boy.[1]

Tom McMullin is mentioned only in the Fallout 3 add-on The Pitt.

Retrieved from "https://fallout.fandom.com/wiki/Tom_McMullin?oldid=3274888"
Community content is available under CC-BY-SA unless otherwise noted.