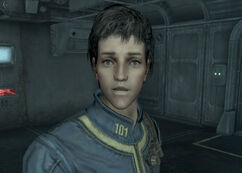 “It's our only chance, don't you see? We're getting out of here, just like the doctor. I'm not going to let anyone stop us.”

During the confusion of the extrication from Vault 101, Mary and Tom Holden attempt to flee the violent security officers O'Brian and Richards, and are usually gunned or beaten down in cold blood unless one steps in to save them.[1]

Escape!: Tom Holden is talking about escaping with his wife, Mary Holden, in the atrium. But when they try to make a run for it, they are shot on sight and killed by Officer O'Brian and Officer Richards unless the player character assaults the guards before the Holdens attempt to make a break for it.

Tom Holden appears only in Fallout 3.

Tom and Mary talking before trying to escape

Retrieved from "https://fallout.fandom.com/wiki/Tom_Holden?oldid=3314532"
Community content is available under CC-BY-SA unless otherwise noted.