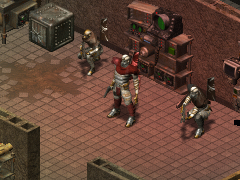 “I will wish you well only because you now battle the minions of the "Dark One". I would not dare to judge the bias of "He" who is the "Electric Father of Creation." It is "His" will that I instruct your "Elders" about the Angelic Electro Magnetic Pulse.”

Tobias Peste is the chief of the Science Division for the Reaver Movement in 2197.

Tobias Peste is a scientist-priest of the Reaver Movement of Transforming States. He is a loud-spoken man and an acclaimed scientific genius in the area of high energy physics. He is an exemplary Reaver, truly worshiping science, with most of his inventions inspired by holy visions that take shape in Reaver workshops. One of them was the appearance of a Yuma Flats YK42B pulse rifle, resulting in the creation of the pulse rifle prototype.

He is saved by the Warrior from the attack by robots.

After he is rescued by the Warrior, the Elders decided it would be best to send him to one of many Brotherhood internment camps and determined that was an excellent opportunity to pick his brain for any additional information. It is unknown what happened to them after that. He could have been set free or restricted to labor camps.