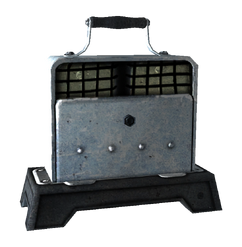 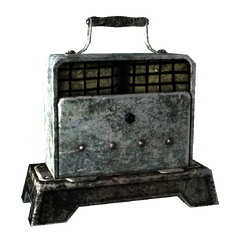 The toaster is a miscellaneous item in Fallout 3 and Fallout: New Vegas.

There are two variants of toasters to be found in Fallout 3 and Fallout: New Vegas, a pre-War and a post-War version. The pre-War version is much rarer in both games. In Fallout 3, toasters can be used for Rock-It Launcher ammunition.

In the add-on Old World Blues, the Courier can take toasters to the Toaster in The Sink and have him convert them into their base components (three microfusion cells, five energy cells and one scrap electronics).

Retrieved from "https://fallout.fandom.com/wiki/Toaster_(Fallout_3)?oldid=3294009"
Community content is available under CC-BY-SA unless otherwise noted.