To Grandmother's House We Go

“An old woman living near your Vault was expecting Holiday visitors, but they haven't arrived and she fears the worst!”

To Grandmother's House We Go is a limited time overseer quest in Fallout Shelter, available during the Christmas season.

This quest takes place in a mine with a random layout. Enemies may include feral ghouls in groups of three, with the occasional glowing ghoul, radscorpions in pairs, mole rats in groups of three, and deathclaws in pairs. At the bottom of the mine, the wasteland settlers can be spoken to, and give you a choice of either a lunchbox or some bottle caps. The room that the settlers are in contains a random rare junk, rare weapon and rare outfit. 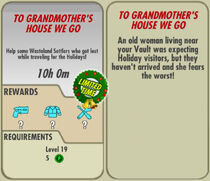 Rewards
Add a photo to this gallery

Retrieved from "https://fallout.fandom.com/wiki/To_Grandmother%27s_House_We_Go?oldid=3262107"
Community content is available under CC-BY-SA unless otherwise noted.