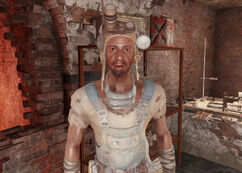 Thomas Weatherby, colloquially known as Tinker Tom (or TT in code),[1] is the quartermaster and primary repairman for the Railroad, operating in the Commonwealth in 2287.

Tinker Tom is the engineer, inventor, weapons expert and the holder of the third-highest position of leadership in the Railroad. As the quartermaster of the organization, he is in charge of maintaining equipment for agents as well as researching new weapons and gadgets for them to use in their operations in the field. Tom joined the Railroad under the leadership of Desdemona in 2279 after an Institute grenade wiped out his family farm.[2] Given his intellect, he was assigned to the HQ and became an essential member of the team; by 2280, he became absolutely indispensable to the Railroad's operations, despite his growing eccentricity.[3]

As time passed, he developed severe psychological problems, suspected to be caused by the extreme stress he was under, also beginning to develop chem addictions.[4] When the DIA facility, named "Switchboard," was discovered in 2281, Tom was reassigned to it. It was there he discovered P.A.M.. During his time there, Tom also restored an Old World cutting edge handgun for use by newly-promoted heavy agent, Tommy Whispers.[5]

In 2283, an Institute informant "Patriot" began attempting to communicate with the outside world. Tom was assigned the task of decrypting the encoded holotapes that were being sent out with escaped synths. Initially unsuccessful, Tom eventually made a breakthrough in 2284 when the coded message was simply two words, "Mass Fusion." He is brilliant and energetic, but also paranoid and constantly fabricates conspiracy theories about the Institute, its synths and their machinations around the Commonwealth.[6]

He is also the only known individual in the Commonwealth who can decode a courser chip, a requirement for entering the Institute.

His has some skill with constructing and improving weaponry, as he had worked on what would become the railway rifle,[7] a Railroad hunting rifle and the Deliverer pistol, among various other weapons Railroad agents utilize.

Tinker Tom appears only in Fallout 4.

Retrieved from "https://fallout.fandom.com/wiki/Tinker_Tom?oldid=3443371"
Community content is available under CC-BY-SA unless otherwise noted.