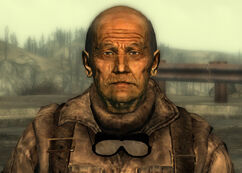 Tinker Joe is a merchant patrolling near the RobCo facility in 2277.

This wandering merchant sells a variety of junk, equipment, and weaponry, but also dabbles in scavenging and selling robot parts. He is built a good rapport with wastelanders, and Sheriff Simms of Megaton is particularly happy with his purchase of Deputies Steel and Weld. He can currently be seen wandering the wastes with his robotic entourage, which includes an old Mister Gutsy army unit named Sergeant RL-3.[1]

Joe sells Sergeant RL-3, a robot companion, for the price of 1000 bottle caps (500 with a Barter skill of 70) if the player character has a neutral Karma. If he is dead, Sergeant RL-3 will no longer be available for recruitment as a companion.

Tinker Joe appears only in Fallout 3.

It is possible that Tinker Joe will be stuck with the protectron and Mister Handy in one spot. The interaction will not be possible. Killing any of them will result in them disappearing. [verified]

Tinker Joe with his robots.
Add a photo to this gallery