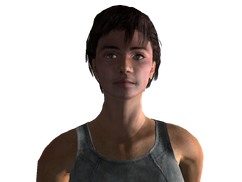 “Paul, it's me. Tina. I heard back from my sister Candace. We couldn't get into a Vault. 101, 87, didn't matter -- all full to capacity. But my brother Alex is a soldier and... he sort of stole the pass code for a secure Army bunker. He did it for the family. But they caught him. Before they took him into custody, Alex he sent each of us one number of the four-digit code. That way, we all have to be together to get in. He gave me number "5" -- the day of my birth. So I guess what I'm saying is... I'm still leaving. It's been fun. Kind of. Oh, and I'm not pregnant! So no worries.”— Tina, on her holotape

Tina Keller was a member of the Keller family.

She is the sister of a soldier named Alex. She dated a guy named Paul right before the Great War, but dumped him to go to the bunker.[1]

Tina Keller is mentioned only in Fallout 3.

Retrieved from "https://fallout.fandom.com/wiki/Tina_Keller?oldid=3273046"
Community content is available under CC-BY-SA unless otherwise noted.