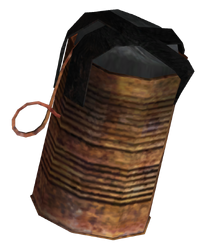 The tin grenade is an improvised thrown explosive device. It is created at a workbench and assembled from scrap. A tin can is used for both the casing and for shrapnel, pistol powder for the explosive and duct tape to hold it all together. The tin grenade can be used to complete the Gun Runners' Arsenal challenge Crackerjack Timing.

This weapon can only be crafted by the Courier after having taken the Mad Bomber perk. It cannot be obtained otherwise.

¹ Craftable without a workbench via a dialogue option with Veronica, or with ED-E once Lonesome Road is installed.

The shortcut key symbol is the one used for mines. [verified]